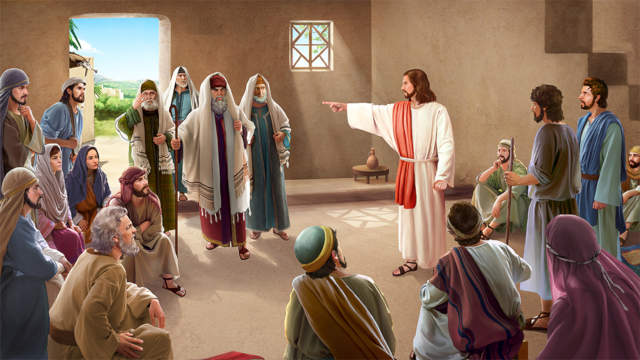 I’m going to open up a barrel of worms today. Before I begin, I want to state clearly that I do not hate Jews nor do I support anti-Semitism. However, I’m sure that what I’m about to write will be labeled as “anti-Semitic”, even though it’s the Truth, by those who hold an affinity to the State of Israel and the Jewish people. So be it. The real truth is fast becoming hate speech in America today. Donald Trump just signed an executive order barring “anti-Semitic hate speech” in college campuses in the country. Soon, this will be a nationwide law where you cannot criticize Israel or their blatant war crimes against the Palestinians, or even question the true numbers that died in the Holocaust. The New Testament will be considered “anti-Semitic” contraband in the future New World Order.

I want to share some verses that most American Christians never have seem to have read since they still falsely believe that the “Jews” today in the State of Israel are “God’s chosen people”. All verses are taken out of the King James text. My commentary will be in RED.

For he is not a Jew, which is one outwardly; neither is that circumcision, which is outward in the flesh. But he is a Jew, which is one inwardly; and circumcision is that of the heart, in the spirit, and not in the letter; whose praise is not of men, but of God. – Romans 2:28-29 (In this verse, the Apostle Paul states that the old covenant Law will not save the Jews, that they must be circumcised of the heart, which means they must have faith in Christ. When Christ died on the cross, his last words were, “IT IS FINISHED.” Jesus fulfilled the law and the covenant that God had with the Old Testament Jews. It’s over, it’s done. The Jews today that still abide by the old law, along with Talmudic and Kabbalistic teachings, reject Christ to this day and are not saved people. And just because they are “Jewish” doesn’t mean they get a free pass.)

What advantage then hath the Jew? or what profit is there of circumcision? – Romans 3:1 (The Jews are not special, Paul clearly says there is no advantage to being a Jew.)

As he saith also in O’see, I will call them my people, which were not my people; and her beloved, was not beloved. And it shall come to pass, that in the place where it was said unto them, Ye are not my people; there shall they be called the children of the living God. – Romans 9:25-26 (The Lord says here that he will call the Gentile Christians, which were once not His people, as his people.)

And if some of the branches be broken off, and thou, being a wild olive tree, wert grafted in among them, and with them partakest of the root and fatness of the olive tree; Boast not against the branches. But if thou boast, thou bearest not the root, but the root thee. Thou wilt say then, The branches were broken off, that I might be grafted in. Well; because of unbelief they were broken off, and thou standest by faith. Be not highminded, but fear: For if God spared not the natural branches, take heed lest he also spare not thee. Behold therefore the goodness and severity of God: on them which fell, severity; but toward thee, goodness, if thou continue in his goodness: otherwise thou also shalt be cut off.  And they also, if they abide not still in unbelief, shall be grafted in: for God is able to graft them in again. For if thou wert cut out of the olive tree which is wild by nature, and wert grafted contrary to nature into a good olive tree: how much more shall these, which be the natural branches, be grafted into their own olive tree? – Romans 11:17-24 (Emphasis mine. These verses should be the biggest indication that God’s covenant with the Jews no longer exists. The natural branches that were broken off are the JEWS. The wild olive tree that was grafted in are the Gentiles that have faith in Christ. Who then are God’s chosen people? Do you believe the Bible or do you believe your Christian Zionist preacher? Paul also admonishes Gentile Christians to fear God and to look at what happened to the non-believing Jews as an example to what will happen to them if they cease being faithful.)

Now to Abraham and his seed were the promises made. He saith not, And to seeds, as of many: but as of one, And to thy seed, which is Christ. – Galatians 3:16 (The promise made to Abraham was fulfilled in Christ.)

And if ye be Christ’s, then are ye Abraham’s seed, and heirs according to the promise. – Galatians 3:29

For in Christ Jesus neither circumcision availeth anything, nor uncircumcision, but a new creature. And as many as walk according to this rule, peace be on them, and mercy, and upon the Israel of God. – Galatians 6:15-16 (Again, Paul clearly states that the true Israel are those that believe in Christ. Not people who call themselves the “chosen people” who carved out a land mass in Palestine and are perpetuating genocide to the inhabitants.)

These New Testament verses thoroughly squash the Zionist myth that the Jews are still God’s chosen people. Only Zionists still believe this myth and perpetuate their false special status as the means for racial superiority. Zionism is cut from the same cloth as Nazism. In their eyes, the rest of us are merely Goyim, or cattle that are to be enslaved and slaughtered like the Palestinian people are today. The New Testament is being labeled as an “anti-Semitic text” by the Zionist influences that permeate our society, government, and institutions. If you are a Christian it’s very important that you understand all of this. You are being led by a false teaching by these churches that are preaching this false Israel-first dispensationalism. Research C.I. Schofield and John Darby, the fathers of the modern day Zionist evangelical teachings. The Zionist State of Israel is not the true Israel of the Bible, they are in fact something much different:

I know thy works, and tribulation, and poverty, (but thou art rich) and I know the blasphemy of them which say they are Jews, and are not, but are the synagogue of Satan. – Revelation 2:9

The State of Israel was created by the United Nations and the Rothschild banking family, not by God. The United Nations is part of the Beast system created by British Freemasonry after World War II. The Israelis today are steeped in the occult teachings of the Talmud and the Kabbalah. The Jewish occult and mystic teachings originated when the Jews were held in captivity in Babylon. Read the Old Testament, for it is filled with scores of examples of how the Jews angered the Lord by practicing the arcane religion of Mystery Babylon. It is the same religion of the Pharisees during Jesus’ day. Christ fought the Pharisees and Sadducees publicly and called them out on their blatant hypocrisy and false teachings:

“Ye are of your father the devil, and the lusts of your father ye will do. He was a murderer from the beginning, and abode not in the truth, because there is no truth in him. When he speaketh a lie, he speaketh of his own: for he is a liar, and the father of it.” – John 8:44

The Zionist Jews hate Christ to this very day. If you don’t believe me, then look what they have to say about Jesus in the Talmud. Gittin 57a states that Jesus “is in hell boiling in a cauldron of excrement“. Listen to what blasphemer Ben Shapiro, a conservative commentator and a Zionist Jew, has to say about Jesus Christ:

Ben Shapiro is an antichrist and a blasphemer. Why any conservative Christian reveres him is beyond me.

Take a look at the photo below. Does that look like Arabic or Hebrew writing to you? It is a Christian church in Israel vandalized by Zionist Jews with the spray painted messages of “Jesus was a monkey, Mary was a cow”. This happens all the time especially around Christmas and Easter and it almost never gets reported, but when someone spray paints a swastika on a synagogue, it makes national headlines. Keep in mind, there are Palestinian Christians that are being oppressed by the Israeli government. Those Palestinian Christians are our brothers and sisters in Christ. Why have American Christians turned their backs on them?

The modern State of Israel is a Satanic counterfeit that is seeking to undo what God did by bringing back the old covenant and putting the whole world under the rule of Talmudic law. As I’ve said before, Zionism is merely one of the major players on the world stage vying for world domination. It is another branch of Mystery Babylon. I implore every Christian to make the right choice to where your true allegiance lies. Does it lie with Christ? Or does it lie with Zionist faux Israel? And remember what Jesus said about serving two masters. I will write more on this in a future post.