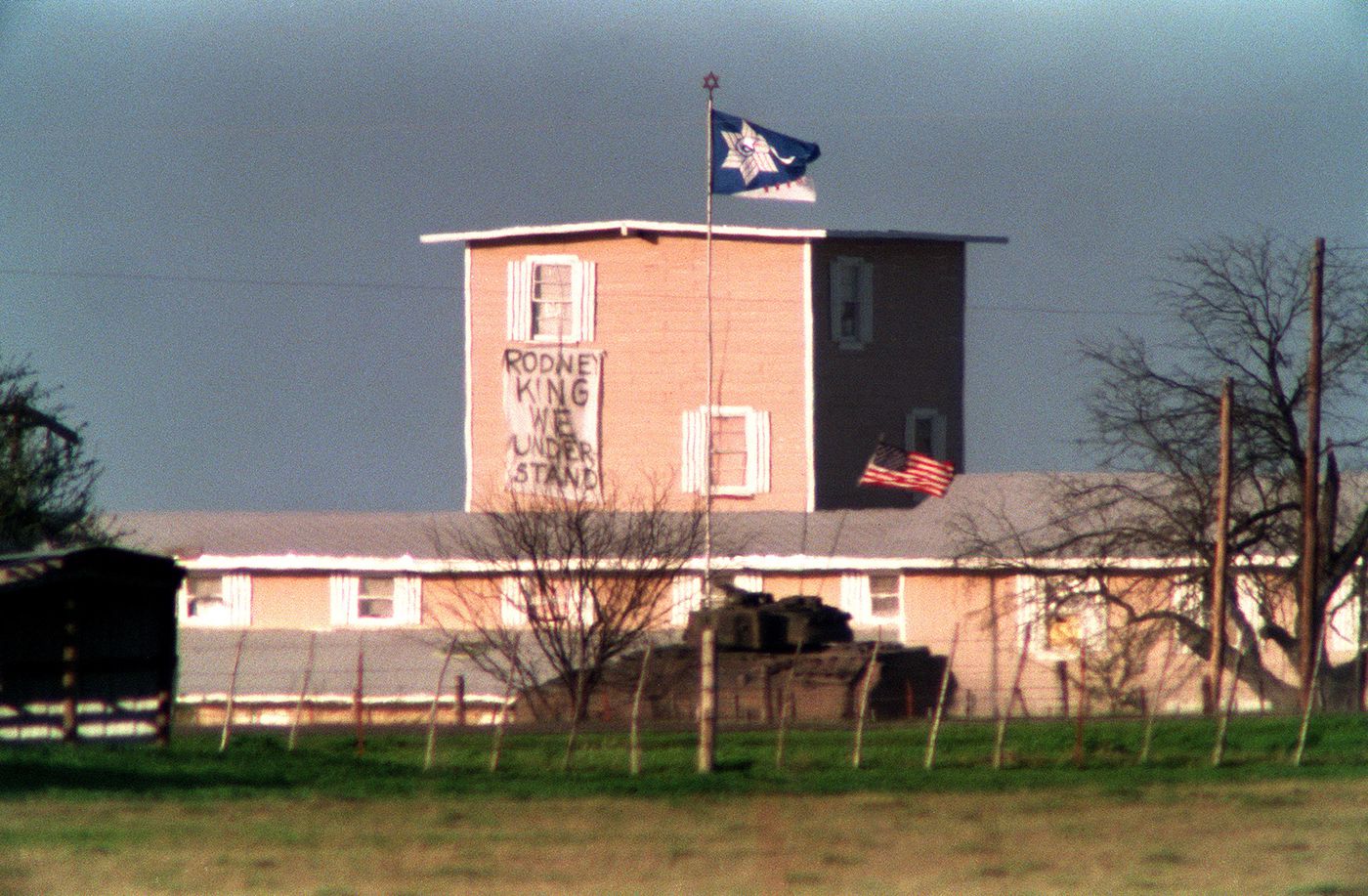 Police brutality is nothing new in America, just ask the Branch Davidians. Most Americans have forgotten Waco. What happened at Waco in 1993 was a cause for an uprising, but unfortunately, the majority of the public turned a blind eye to the atrocities committed against David Koresh and the Branch Davidian sect by federal law enforcement over made up charges. The police state should have been nipped in the bud back in 1993, but instead the public cheered it on saying “The Davidians were just a bunch of religious fanatics, they got what they deserved.” Shame on us.

Now the police state has grown and morphed into the militarized monster it is today, and it has done so through the public’s consent. George Floyd is just the latest casualty of this beast. There are many more people though, however, all across this country getting killed by cops daily. Take note how the establishment, in its typical divisive manner, is trying hard to make this a race issue. It’s obvious they are trying to take the focus away from the police state and funnel the anger against racism. How convenient. It’s easy to stand back and point the finger at systemic racism since there are indeed many racist cops and racial profiling does exist. There’s no denying it exists, however, the root goes a lot deeper than that. These are merely symptoms of a much larger problem and the truth is America has a systemic police state problem. I will write more on this later.

For those folks that thought that the Branch Davidians got what they deserved because they were ‘a bunch of religious fanatics’ or George Floyd got what he deserved because he was a ‘street thug’, or the peaceful protesters in Washington D.C. got what they deserved the other day when the police, military and Secret Service fired tear gas and flash bangs to clear them out so that Trump could get his photo op in front of a church, what do you suppose the public ought to say about you when the police come charging through your door or puts a knee on your neck? Many people are being caught up in the dragnet today; no one is exempt. When you support the trampling of another person’s rights, you are in effect supporting the trampling of your own rights. Those of you that support rolling out the military to quell the protests and riots, be careful what you ask for, one day the guns may be turned against you. The boot is coming down on all of us. Something to think about.

P.S. A lot of people were speaking the truth in 1993. One those individuals was the comedian Bill Hicks:

“They want you to take a side. And defend it. And get very bloody passionate about it. That’s what the game’s all about. Have you chosen your role in their play yet? Are you thoroughly pissed off like they want you to be? Hate the cops? Hate the protesters/rioters? Good. You’ve fulfilled their chosen role for you.” – Daniel McAdams of the Ron Paul Institute

Couldn’t have said it better myself. There is no 100% “right side” to this, though the media wants to funnel the groupthink into two clear cut opposing camps. Use reasoning, not emotion when looking at this. Only then will it become clear that “they” want us divided.

Blacks, you need to stop being manipulated. You are being used to destroy this country from within. Some of you are very smart and can see right through all of this. You understand that these bleeding heart white liberals are really just race baiters using you to bring about Karl Marx’s “dictatorship of the proletariat“. You know and understand that they are not your liberators, President Lyndon Johnson was not your liberator, and that he put you right back on the plantation with drugs and welfare. These white liberals are only pretending care about you, in secret they don’t give a damn. The only thing that these riots are accomplishing is setting your people back into deeper bondage. Please educate your brothers and sisters so that they’ll stop falling for this manipulation.

Please note: not all of these protesters are apart of this mob. A lot of them are protesting peacefully and are not taking any part in the destruction of their communities. I support those protesters as should we all. As time goes on, it is becoming more and more obvious that the violence and looting has been carefully orchestrated by well trained agent provocateurs who are most likely being heavily funded by George Soros. There’s a lot of people on the ground right now that are awake to this and smell the stench of a set up. Many videos are circulating on the internet of PSYOP agent provocateurs with possible government connections who instigated the destruction of buildings and local businesses in Minneapolis. It has been widely reported that pallets of bricks are mysteriously being dropped off in key areas in some cities, and the local Minneapolis government officials have stated that over 80% of those arrested in the last day were not even from the local area. Local media in Minneapolis and state officials are now trying to deflect the blame by saying that “white supremacist” groups and drug cartels are carrying out the violence. This is total phony BS and any clear thinking person with a brain in their head knows it.

I firmly believe that these events have been well organized and planned by the powers that be with busloads of useful idiots doing the dirty work to make them look like an organic grassroots movement. America was beginning to unite against the state supremacists during the coronavirus lockdown, so they needed something to nip that in the bud. These riots serve the purpose of plunging an already weakened nation into more chaos while fanning the flames of racial divisions. They now have put manipulated race issues front and center. Divide and conquer is the name of the game, and if they can stoke race riots in the cities then the sheeple will never unite against the real enemy. At the same time, ordinary folks are going to beg for order. As things get even more chaotic, the public will cry out for more lockdowns and police state measures. They will begin to applaud troops being on the streets. Wake the hell up America, you are being played and this is only going to end with more lockdowns, checkpoints, cameras, curfews, police and troops on the streets. That is the end goal and most people are falling right into the trap. 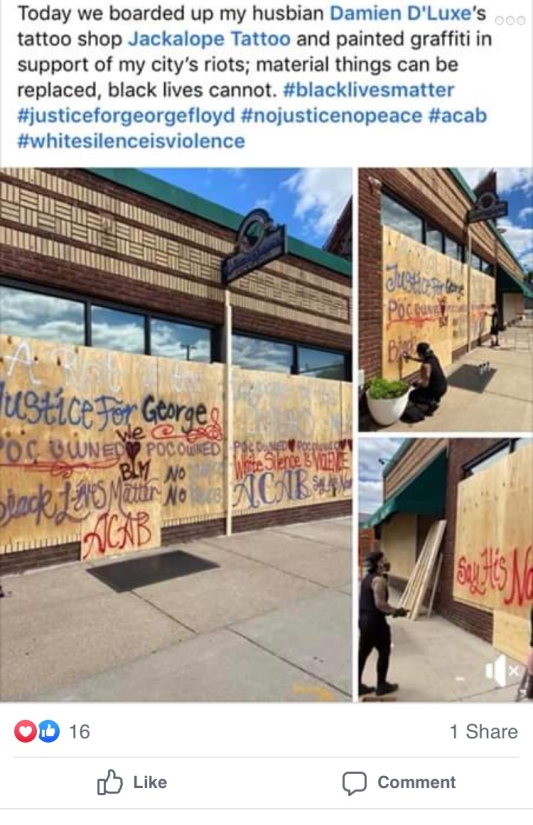 The above posts are probably one of the most topsy-turvy things I have ever seen. Self-hating business owners in Minneapolis who don’t care if their livelihoods literally go up in flames. And these are just a few out of a handful of social media posts that have been put out in recent days. Not only do they not care, but they go so far as to condone the actions of the rioters in name of “justice”. This is not justice folks, you do not obtain justice by destroying your communities. This is anarchy which will be followed by absolute and total police state control. ORDO AB CHAO – Order out of Chaos; you are witnessing it right now in real time across America. If folks thought the police were brutal before this, they haven’t seen anything yet. And these rent-a-mob rioters along with their useful idiot sympathizers are playing right into the trap that has been laid out for them. The offshoot of this will be the same as that of the COVID-19 plandemic – total control by the state. You can count on it. Am I the only one that sees the perfect timing of all this as places in America begin to open up? I sure hope not.

I’ve have also seen folks post how they have no right to call out these rioters for their behavior since they are rioting for “justice against their oppressors”. For example I’ve seen a lot of people state the following – “Well who am I to tell them how they should protest?”

You not only have the right, but the DUTY as a civilized member of society to object to violence and anarchy in all its forms. You have a duty to not only call out aggression from the state, but also aggression from unscrupulous elements of our society. Two wrongs don’t make a right. Folks stating the above are complicit accomplices in the destruction of property and lives that is taking place. By turning a blind eye to it and promoting it in the name of “social justice”, you might as well have been on the streets hurling molotov cocktails. The problem with useful idiot liberals (not my words, that’s what Lenin called you) is that in their quest for “social justice”, they’ve lost their self-respect. The social media posts at the top speak for themselves. Being that they have no self-respect, they lack respect for others and their lives and property. This is a symptom of a country that is committing national suicide.

The rule of law must prevail, if not, then be prepared to wear the chains that your masters have been forging for you. Rod Sterling from the old show The Twilight Zone said it best:

‘For civilization to survive, the human race has to remain civilized.’ Maybe instead of depending on an inept National Guard and corrupt police force for protection, perhaps it’s time for business owners in Minneapolis and elsewhere to start depending on themselves to protect their livelihood against thugs, rioters and agent provocateurs. I think the citizens in Koreatown during the 1992 LA Riots set a fine example. Just a thought.