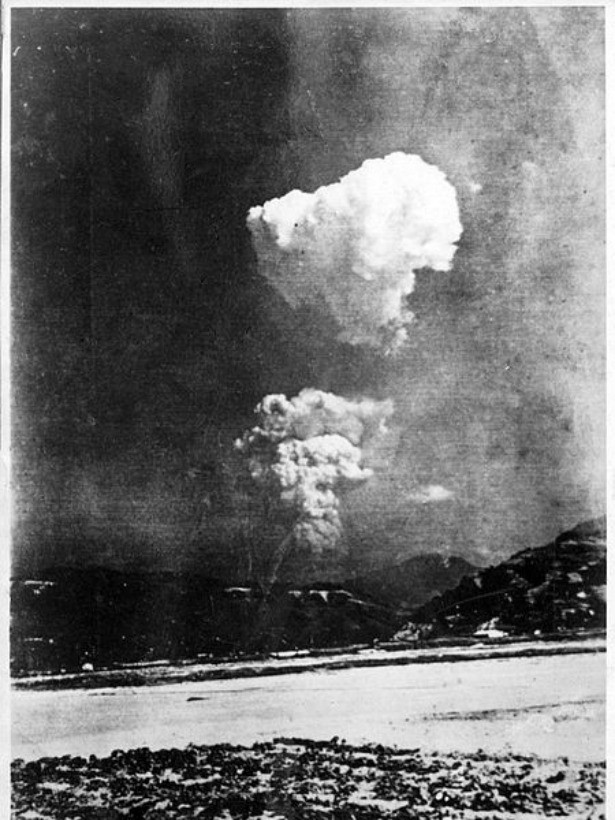 A rare photo of the atomic mushroom cloud rising above Hiroshima on August 6, 1945. 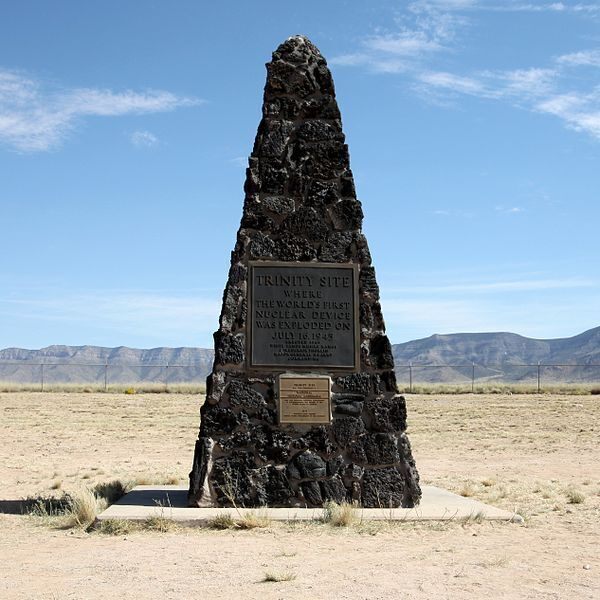 Obelisk monument at the Trinity Site where the first atomic test was conducted in 1945. The Trinity Site (trinity = pyramid) is located on the 33rd Degree parallel in White Sands, New Mexico. The order to drop the two atomic bombs on Japan was given by the 33rd President Harry S. Truman who was bestowed the honorary 33rd Degree by the Scottish Rite of Freemasonry after the bombs were dropped on Japan’s two cities with the largest Christian populations. Truman fulfilled his role in the Illuminati’s “Great Work” in 1945.

The establishment and their corporate media lackeys along with their stooges in academia have long maintained that the two atomic bombs that were dropped on Hiroshima and Nagasaki were a “necessary evil” to make the Japanese sue for peace and end World War II. They assert that the Japanese had no intention of surrendering and were willing to sacrifice every last citizen in battle before surrender. In an effort to put the devastation and mass murder of over 200,000 civilians in a “good light”, the establishment told us that the only alternative to dropping the A-bombs was a full scale invasion of Japan, and that the bombs actually saved the lives of millions in the long run. All of these assertions are lies. The truth is, Japan was already in the process of surrendering before the bombs were dropped. Japan wanted a conditional surrender, however, and requested that their Emperor Hirohito would not be tried for war crimes nor would he be incarcerated or executed under a tribunal. Japan was willing to surrender but wanted to ensure to that they kept their emperor. The United States rejected their conditional surrender and later dropped atomic bombs on the city of Hiroshima on August 6, 1945, then on the city of Nagasaki on August 9. Japan later announced their surrender on August 15, 1945, then signed a formal US led unconditional surrender aboard the USS Missouri on September 2. Even though the surrender was unconditional, the Allies never pursued to try and imprison Emperor Hirohito for war crimes, thus granting Japan’s original request.

If the atomic bombs weren’t necessary to get the Japanese to surrender and the United States granted Japan’s original request of their terms of surrender anyway, then what purpose did such a devastating display of firepower serve? The two atomic bombs ushered in the Atomic Age and the Hegelian arms race between the West and the Soviet Union during the Cold War. The bombs were meant to have a psychological effect upon the world. The message conveyed in 1945 by the world power elite was clear: all countries must disarm and give up their sovereignty to the world governing body under the United Nations or else face more Hiroshimas and Nagasakis. For more information on this, research Public Law 87-297 passed by JFK in 1961 and its accompanying State Department Publication 7277. The total disarmament plan was for the military of the United States to relinquish its sovereignty to the communist controlled United Nations. All weapons, including citizen-owned small arms were and still are slated to be banned, and only the United Nations world “peacekeeping” forces will have the monopoly of violence in the New World Order.

“Today, every inhabitant of this planet must contemplate the day when this planet may no longer be habitable. Every man, woman and child lives under a nuclear sword of Damocles, hanging by the slenderest of threads, capable of being cut at any moment by accident or miscalculation or by madness. The weapons of war must be abolished before they abolish us.”

The truth is is that there really was no threat of nuclear war during those decades following World War II. Nuclear war along with the fallout shelters, duck and cover drills, and the constant manipulated public fear and anxiety of an imminent exchange of intercontinental ballistic missiles by the US and the USSR was the contrived “boogeyman” that the powers that be created during those decades to get nations of the world to look towards world government as the answer to stave off an seemingly imminent World War III.

Like the fire bombings of Dresden, the atomic bombings of Hiroshima and Nagasaki will go down as heinous war crimes, though no one has nor ever will be convicted for them. Admiral William D. Leahy, who was President Roosevelt’s Chief of Staff then later Chief of Staff under Truman, stated to a confidant that the Japanese were willing to surrender as early as 1943. In my study of the war in the Pacific, I firmly believe that the Japanese realized that the war was lost when the US sunk their four main aircraft carriers during the Battle of Midway in June 1942. This coincides with what Admiral Leahy stated and he even later admitted in a 1950 memoir that the Japanese were ready surrender long before the two atomic bombs were dropped.

“The use of this barbarous weapon…was of no material assistance in our war against Japan.” —Adm. William Leahy, Truman’s Chief of Staff

“It was a mistake…. [the scientists] had this toy and they wanted to try it out, so they dropped it.” —Adm. William “Bull” Halsey

“This is the greatest thing in history.” – President Harry Truman commenting on Hiroshima and Nagasaki.