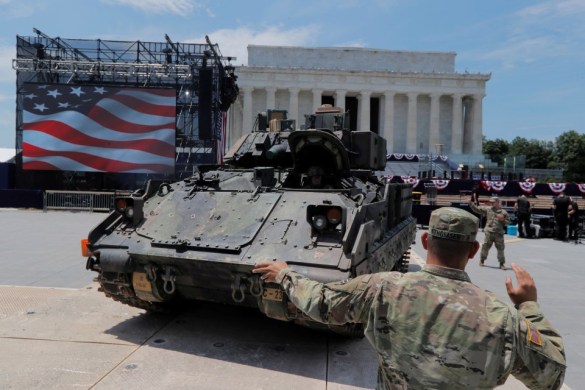 I’ve noticed over the years, especially over the past couple of years since Donald Trump has become president, the unabashed WORSHIP of the military on Independence Day. Since when has this day been about the commemoration of the standing army that our Founding Fathers vehemently warned us about? I have to say, at the risk of sounding like a liberal, I find Trump’s “Salute to America” military parade pretty nauseating and a total waste of taxpayer money. Today is about remembering the birth of this nation, the separation from the tyranny of England, and the principles and ideals of liberty. It’s about remembering the great men that put everything on the line for their posterity so that each citizen could be a sovereign king or queen in his or her right. It was never about the military. This stunt in Washington D.C. today is just another way that our government is thumbing its nose at the world and showing off its military capabilities on full display as if to say: “Who can make war against the Beast?” In reality, it’s all about government supremacy. How ironic it is that a holiday that is supposed to be a celebration of secession from statists and standing armies has now morphed into something that is all about statism and standing armies.

Stop perverting the Independence Day holiday. It’s not about the military and it never was. If what I wrote above angers you, then you have fallen for the politically correct form of patriotism that is prevalent in modern-day America. You are drinking out of a large pitcher of Kool-Aid flavored with red, white, and blue bullshit, and I suggest you put it down and wake up. 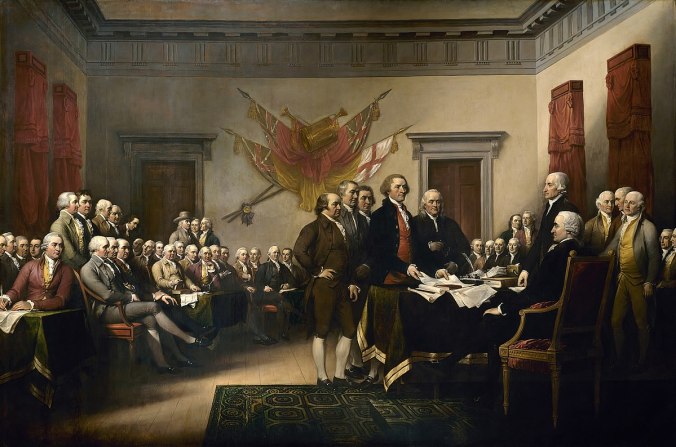 Five signers were captured by the British as traitors, and tortured before they died. Twelve had their homes ransacked and burned. Two lost their sons in the revolutionary army, another had two sons captured. Nine of the 56 fought and died from wounds or hardships of the revolutionary war.

They signed and they pledged their lives, their fortunes, and their sacred honor.

What kind of men were they? Twenty-four were lawyers and jurists. Eleven were merchants, nine were farmers and large plantation owners, men of means, well educated. But they signed the Declaration of Independence knowing full well that the penalty would be death if they were captured.

Carter Braxton of Virginia, a wealthy planter and trader, saw his ships swept from the seas by the British Navy. He sold his home and properties to pay his debts, and died in rags.

Thomas McKeam was so hounded by the British that he was forced to move his family almost constantly. He served in the Congress without pay, and his family was kept in hiding. His possessions were taken from him, and poverty was his reward.

Vandals or soldiers or both, looted the properties of Ellery, Clymer, Hall, Walton, Gwinnett, Heyward, Ruttledge, and Middleton.

At the battle of Yorktown, Thomas Nelson Jr., noted that the British General Cornwallis had taken over the Nelson home for his headquarters. The owner quietly urged General George Washington to open fire. The home was destroyed, and Nelson died bankrupt.

Francis Lewis had his home and properties destroyed. The enemy jailed his wife, and she died within a few months.

John Hart was driven from his wife’s bedside as she was dying. Their 13 children fled for their lives. His fields and his gristmill were laid to waste. For more than a year he lived in forests and caves, returning home to find his wife dead and his children vanished. A few weeks later he died from exhaustion and a broken heart. Norris and Livingston suffered similar fates.

These men risked everything, some of them losing everything including their lives. How many people in America today have even half of the guts that these great men had? Our sense of rebellion and fire for liberty is being bred out of our DNA these days. Apathy and ignorance have gained a stranglehold on our population today. To be a patriot now in America means to wear an American flag shirt once a year and pop fireworks. An ignoble population now lives comfortably ignorant and enslaved, all while giving up the fruits that our Founders fought and bled for. It literally costs nothing to be “patriotic” in America today. But in 1776, it cost them everything. We owe a serious debt to these men.

Seriously, how many of you have the guts to risk everything, to forsake the comforts of this life, to forsake your homes, your possessions, your wealth, and your families to fight a guerilla war against those that are actively trying to take away your liberty and enslave you and your posterity? How many of you would leave everything behind to live in the woods with just your rifle and your provisions for an extended period of time? Americans have grown soft over the generations. They lack the grit and testicular fortitude that it took to go up against the most powerful empire and standing military of the time. There’s only a handful of us left that are truly ready to do what our ancestors had to do. I find comfort and hope that it only took a handful, 3-5% of the total population, to win independence from Great Britian. I’m afraid, however, that in the not so distant future we will find out who is ready and willing. There will come a terminal point in the next few years, and every single American will have no choice but to decide how much they are willing to risk in order to be free. Something to think about.