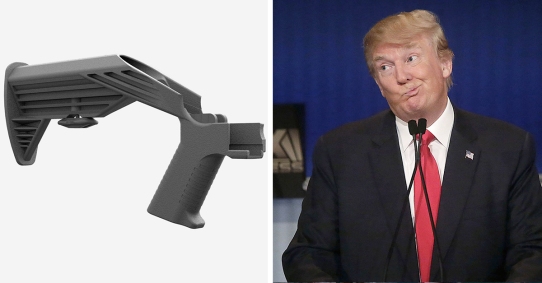 Today, our rights were trampled upon again by the charlatan in the Oval Office. The Trump Administration officially released its unconstitutional ban on bump stocks for semi-automatic rifles. Using the tactics of his socialist so called “opposition”, bump stocks have now been reclassified as machine guns to be regulated under the National Firearms Act of 1934, even though they are merely a firearm accessory that does not alter the semi-automatic feature on the rifle. However, the king has spoken and everyone who is in possession of a bump stock has 90 days to either destroy it, or turn it in to an ATF agent.

Let me remind you that Obama tried the same angle against M855 “green tip” 5.56 mm ammunition and proposed a rule to have the ammunition reclassified as “armor piercing”. His proposal failed and thus it was dropped altogether. President Trump used Obama’s unconstitutional methods and succeeded. Anyone in possession a bump stock after 90 days will be a felon. So much for a president that campaigned on “protecting the 2nd Amendment”. Donald Trump betrayed gun owners. He is now more successful than Obama at enacting gun control and getting unconstitutional regulations to stick. And most conservatives are still sound asleep, head under the covers, or making excuses as to why this man is doing what he is doing. And for all you fools that say, “Well it’s just bump stocks, I’ll never buy one so I don’t care if they’re banned.” You are sheeple. What Trump just did opens up a path for a future president who wants to ban semi-automatic rifles, to simply re-class certain parts of the gun and regulate them under the many already illegal gun control acts and “laws” that are on the books. Donald Trump has just set a dangerous precedent. Are you foolish enough to believe that this won’t be tried against so called “assault weapons”? When are you guys going to stop being stupid? Just remember, it will be bump stocks today, semi-automatics tomorrow, then your deer rifle, shotgun, and .22 next. The agenda is to BAN ALL GUNS. Once they get all the military pattern weapons out of the public’s hands, they will simply state that your .30-06 deer rifle is a sniper rifle and must be registered to be later confiscated. I recommend everyone reading this to contact your state representatives and demand that they exercise their power enumerated in the 10th Amendment and craft bills that declare federal gun controls null and void within the state. This can be done, which is why our Founders put it in the Bill of Rights. In case you forgot:

Amendment X: The powers not delegated to the United States by the Constitution, nor prohibited by it to the States, are reserved to the States respectively, or to the people.

What happened today is just another major indication that the time is near. We are another minute closer to Midnight. At Midnight, the every single American will have to make the final choice whether they want to or not. Will they choose to stand upon their own feet once again and defend their Creator endowed rights like our ancestors did, or will they bow down, kiss the ring and put on the chains of enslavement and be subject to the rule of tyrants? Most people are cowards and will not fight. They are not prepared to lay their life on the line for freedom. They will be subject to whoever wins the war and they better pray that it will be us

Those of you who are awake, prepare and make ready. Get what you need while you still can. Ammunition is at a 10 year low with calibers like .308 at $0.40 a round for decent NATO surplus. I believe we have about a 2 year window for these prices before they skyrocket again. Think about it, if the Democrats take the throne in 2020, all the Trumpsters and Qanon balls that have been sleeping for the last 4 years will suddenly “wake up” in a panic and make a run for guns and ammunition. Stock up while the fools worship their dear leader. Don’t forget to train too. Starting next year, I’m going to make several posts about certain rifles, calibers, and field gear I recommend to every person that is committed to preserving their God given rights in the face of the coming New Age. I will go over battle rifles and handguns that I have personal experience with, along with training, drills, and tactics that we will need to know in the future for the rainy days ahead.

I hope everyone of you has a great holiday season. Cherish your time with your family and friends. I will be back with more posts starting next year.